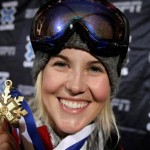 It was January 10th when skier Sarah Burke was injured in a training accident at the superpipe in Park City, Utah.  Today it was announced that she has passed away.  The accident did not appear severe to onlookers but it proved otherwise as she went into cardiac arrest and was later revived on the hill.  Burke underwent surgery to repair a torn vertebral artery the day after the accident and remained on a ventilator until today.  The vertebral artery supplies blood to the brain stem and the back of the brain.

Burke was heralded as one of the driving forces that lead to the inclusion of Women’s Freestyle Skiing in the Winter Olympics which will make its first appearance in the upcoming 2014 Games in Sochi, Russia.  The 29 year old had four gold medals in Superpipe from the X Games (2007-2011) and a gold medal from the FIS Freestyle Ski World Championships in 2006.  In 2007 she was voted the Best Female Action Sports Athlete at the ESPY Awards.  Without doubt, Burke would have been a heavy favorite to defend her Superpipe gold medal at the 2012 X Games and compete for gold in 2014 at the Olympics.  Instead she will be remembered as someone who permanently changed freestyle skiing and inspired many young girls to pursue their dreams.