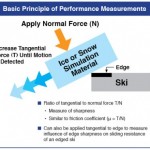 Skiers and snowboarders know that a sharp edge makes a world of difference in performance. At the recent Sochi Olympics, for example, the women’s Super Combined Downhill winner, Julia Mancusso of the US beat Swiss Lara Gut by just 0.47 seconds. Close finish times like these indicate nano-level difference in condition of both the skier and her equipment. To try to shave off some time by improving the sharpness of the ski edge, researchers at the Surface Metrology and Sports Engineering Labs at Worcester Polytechnic Institute in Worcester, Massachusetts (US) developed a device capable of measuring sharpness of edges. Using the Olympus Lext OLS4000 laser scanning confocal microscope they made extremely precise 3D ski edge measurements.
Sharpness is determined by applying a predetermined load to material like ice or a snow simulation material, oriented at a fixed angle to the edge, then measuring the load necessary to cause movement perpendicular and parallel to the edge (figure 1).
Dr. Brown and his team have pioneered a new way to measure ski edge sharpness by accurately characterizing ski edge curvature.
The geometry is measured and the curvature is calculated as functions of scale and position over the edge. Correlations are determined by linear regression analyses of performance versus curvature as a function of scale. 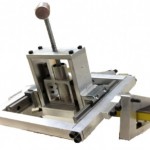 Measuring curvature
The teams at WPI Surface Metrology and Sports Engineering Labs, led by Professor Christopher Brown, intended to create a new way of looking at ski edge curvature, which provides an extremely precise means of viewing and analyzing ski edge roundness and roughness. They developed the device shown in figure 2 for optimal ski edge viewing. 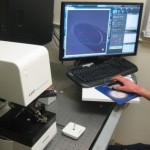 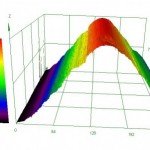 Roughness imaging & analysis
To showcase the effectiveness of this system, the Surface Metrology and Sports Engineering Labs created and analyzed images of ski edges created with a variety of sharpening techniques.
Figure 4: Profile of ski edge with no modifications 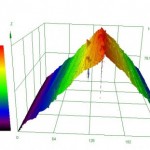 Figure 5: The same ski edge after sharpening with a file and honing with a stone. Sharpening and honing were done in an alternating fashion (switching between base edge and side edge) to minimize any burr.

Figure 6: The same ski edge after additional sharpening with a coarse diamond stone from one side. It can be seen that after this sharpening that there is a small but 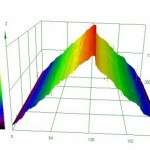 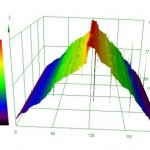 Figure 8: The ski edge from Figure 7 after an additional standard-method sharpening with a ceramic stone. This additional process renders the surface much smoother and also produces a less jagged bur 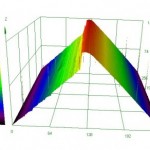 “In a sport where victory is measured in hundredths of a second, slight equipment adjustment can make the difference between victory and defeat,” said Dr. Brown. “Prior to our work, there was no way to measure the curvature of a ski edge at this level of magnification and clarity. Based on our prototype, however, skiers will now be able to verify the sharpness of their skis to a level of precision previously not possible. We’ve opened a new world of measurement.”
Moving toward commercialization

The level of curvature imaging and edge measurement allowed by this new device is made possible by the implementation of direct geometric 3D confocal microscopy, which allows the calculation of curvature versus position and scale, a new calculation method used exclusively by this patent-pending system. In the past, curvature characterization had been problematic, as curvature varies with scale and position. Through their work with this new ski edge measurement system, WPI Surface Metrology and Sports Engineering Labs are pioneering multi-scale position-specific curvature characterization. A provisional patent has been filed and someday systems like this could be part of the professional skier’s toolkit, helping them shave critical time when it matters most.